God Works Through His Children

How was your weekend? Hope you had a lovely weekend.

Are you familiar with the story of the widow at Zarephath in 1 Kings 17:1-24? Let me explain the story quickly to you.

So, there was a great drought in the land of Israel where Elijah had declared that there was going to be no rain due to the sins that were committed by King Ahab and his wife (Jezebel). If you want to know more about the sins, please check out 1 Kings 16:29-34.

The absence of rain-affected their food production, which led to a lack of food and water in the country. Since Prophet Elijah was also living in the country, he was also without food and drink. However, God made provision for him by sending ravens to bring him food.

God directed Elijah by describing the place where he needed to be to meet the ravens for food and drink. However, after this, the land continued to dry up and there was still no food in the land.

Back to the story...

Elijah went to Zarephath as instructed by God. When he came to the town gate, a widow was there gathering sticks. He called to her and asked, “Would you bring me a little water in a jar so I may have a drink?” As she was going to get it, Elijah called her in a polite way for her to bring a piece of bread. You would think since the Lord had mentioned to Elijah that He had directed a widow to supply him with food, the widow would immediately give Elijah food? No, that did not happen straight away. What does this tell you about God’s promises and instructions to you?

The widow said she didn’t have any bread - only a handful of flour in a jar and a little olive oil in a jug and she was gathering sticks to take home and make a meal for herself and son so that they could eat and die.

Elijah then encouraged her by saying that she should not be afraid but she should go home and do what he had said which was for her to: “first make a small loaf of bread for me from what you have and bring it to me, and then make something for yourself and your son”. For this is what the Lord, the God of Israel, says: ‘The jar of flour will not be used up and the jug of oil will not run dry until the day the Lord sends rain on the land.’

The widow went away and did as Elijah had asked. So, there was food every day for Elijah and for the woman and her son. Can you see another characteristic of God here?

God always works through His children to fulfil His plans. Sometimes you may believe you are responding logically to things but it is God working through you. 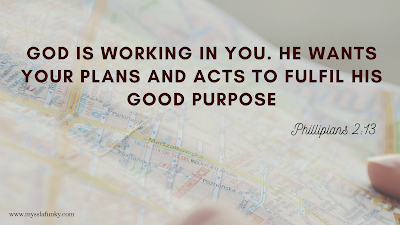 The charge for this week is for you to be conscious of the fact that God is going to be working in you to fulfil His purpose for your life. Are you going to let Him work in you?

Have a lovely week ahead.

See you next week