Be an Influencer for Christ

Happy New Week! Hope you had a lovely weekend and hope it was a relaxing one.

Today's topic is about being an influencer. When you hear the word 'influencer', what comes to your mind?  Brand influencers? Social media influencers? A famous person? Let me attempt to define what it means to be an influencer. Influencers are usually ordinary people like you and me, who have the power to persuade others to undertake a task based on their credibility or popularity or expertise, or their knowledge/wisdom.

Do you know that influencers are so influential that they do not need to force you to undertake a task before you undertake it? The fact that they mentioned something or shared something may persuade their followers or friends or audience to consider engaging in the same task. Based on this, companies pay social media influencers and brand influencers to subtly advertise their products online. As Christians, we can also be an influencer for Christ.

In the Bible, we have a number of people that were influencers. I will focus on a man (Simon Peter) who was an influencer to his co-workers (disciples) in a subtle way. There was an account in the bible where it was recorded that Simon Peter mentioned to his co-workers that he was going out to fish. Guess what the rest of his co-workers immediately told him after he said he was going out fishing? They responded to Simon Peter by saying: "We'll go with you". Please, note, Simon Peter did not directly ask them to tag along. Can you see the power of an influence? The book of John 21:3 recorded that the disciples tagged along and went out together to fish with Simon Peter. What does this tell you about who an influencer is?

It is very easy for humans to be influenced to do things. Whether it is seeing a picture of new cloth, a new hairstyle, a new haircut, pictures of food, a video of something, etc, it is so easy for us to be subtly influenced without us realising. I'd like to ask you these questions: who are you following on social media? Who are you relating with? Who are your friends? Who are you listening to? What websites are you checking on a regular basis? What are you listening to? Which groups are you on? Where are you hanging out?  You need to guard your heart diligently and be mindful of what you feed your minds with. 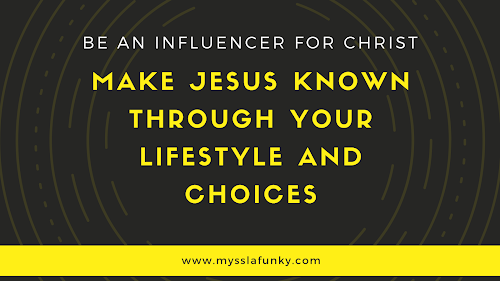 The charge for this week is for you to be an influencer for Christ. Make Jesus known through your lifestyle and choices. Also, be mindful of the people that you follow or listen to, they have the power to influence you subconsciously.

See you next week Monday.