God Can Stir Up the Heart of Non-Christians

Let me share a story in the Bible with you. There was an ungodly king called Cyrus that reigned in Persia from 559 to 530 (B.C - BC stands for Before Christ). He wasn't an Israelite neither did he believe in the God of Israel. The Bible recorded something amazing that happened to Ezra in the Book of  Ezra 1:1-2. It says:

"The Lord stirred up the spirit of Cyrus king of Persia so that he made a proclamation throughout all his kingdom, and also put it in writing, saying, Thus says Cyrus king of Persia: All the kingdoms of the earth the Lord God of heaven has given me. And He has commanded me to build Him a house at Jerusalem which is in Judah."

Did you notice what king Cyrus said above? He said the Lord God of heaven has commanded him to build a house for Him in Judah. This was a man that did not believe in the Lord God of Israel but because the Lord stirred up his spirit, God used Cyrus to establish His sovereign plans on earth.

King Cyrus further stated in Ezra 1:3 that: "Who is among you of all His people? May his God be with him, and let him go up to Jerusalem which is in Judah, and build the house of the Lord God of Israel (He is God), which is in Jerusalem."

There are a number of lessons that you can learn from how God stirred up the spirit of an ungodly king. Let me share a few and please feel free to add more lessons to it:

1b) Also, God can stir up the heart of anyone to favour you. You do not need to have a special relationship with the person before God uses them to favour you.

2) It is not by accident that people accomplish God's purpose for their lives. Did you know that 100 years before Cyrus accomplished an assignment for God, Prophet Isaiah had prophesied that Cyrus will be a shepherd for God and he will do what God says and he will play a role in rebuilding Jerusalem and restoring the temple (Isaiah 44:28)?  This is quite encouraging to know that God's desire is to cause His children to accomplish His work on earth. Although I believe sin in an individual's life could delay God's plans for their lives from being fulfilled or for the plans to be cut short (Deuteronomy 28:15). Therefore, it is advisable for you to keep walking in obedience to God's Word so that His plans for your life can be fulfilled as He intends them to be.

3) Don't be too quick to dismiss what a non-christian tells you. Take time to examine their advice in line with the Word of God, and also ask God to speak to you concerning what someone has said even if they are a Christian.

Are there other lessons that you could pick out from how God stirred up the spirit of Cyrus? Please, take a minute to share by leaving a comment.

Do You Sometimes Limit God?

How are you doing? Hope you had a lovely weekend. It's a New Week! Glory be to God in the Highest! This week's article is about my recent experience with God. I was having a conversation with God in my thoughts as you know, God hears our silent prayers. A Scripture to corroborate this can be found in Psalm 139:4 which says that God knows what we are going to say even before we say it.

Back to my silent conversation with God. I asked God that I would like Him to make provisions for us (my family) to bless some people with some particular gifts. I carefully came up with a reasonable figure that I believe God should bless us with so that we can be a blessing. God immediately explained to me that I was limiting Him. He said that my prayer was doubting His ability to provide for us abundantly. He reminded me of His Word in Psalm 24:1 which says "The earth is the Lord’s, and all its fullness, the world and those who dwell therein."

God reminded me that the earth belongs to Him, He owns every single thing in this world, and He can create and make provision for everything even things that my mind cannot comprehend, God said He can create new things as He has the power to do anything, absolutely anything. Isn't this mind-blowing?

God also said every single thing is under His control, and the whole world and I have no idea of things that are still subjected to Him. The Scripture that corroborated what God said to me can be found in Hebrews 2:8. Let me share an image that you can read about Hebrews 2:8. 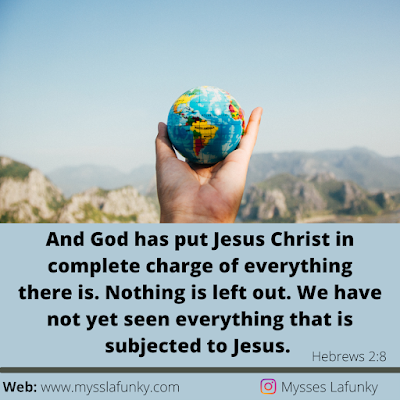 Making A Conscious Effort to Spend Time with God

How are you doing? I hope your new week is going well. Last week, I (with the inspiration of the Holy Spirit)  wrote about "The Use of the Lord's Prayer." If you haven't read the article, please click this link to read it; you will gain something new. This week's article is about making a conscious effort to spend time with God. 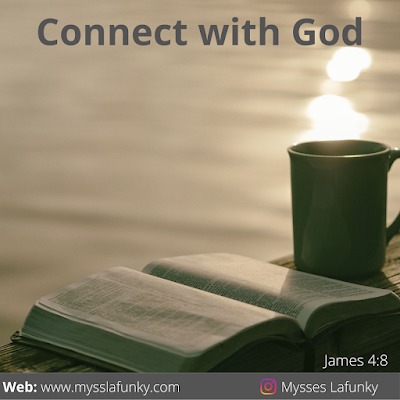 As a Christian, are you intentional in creating time to connect with God? God is always wanting to spend time with His children. I love the story of Zaccheaus in the Bible (Luke 19:1-6). Let me share a Bible Story video about Zaccheaus with you. This video is from Saddleback Kids Bible Stories' Youtube channel. Click here to watch the video.
Read more »
Posted by Mysses Lafunky at 15:57 No comments:

How Do You Use The Lord's Prayer?

How are you doing? I hope you had a lovely weekend. Thank God for keeping each and every one of us alive to see another week. It is always a privilege to be alive.

This week's article is about The Lord's Prayer 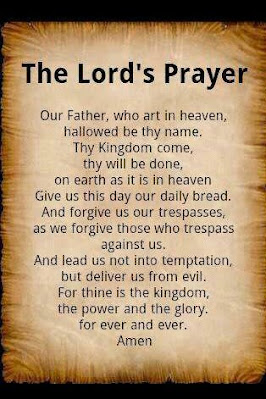 Your Life Can Be Meaningful

Hello Everyone,
Happy New Month! Thank God for keeping us through the first 7 months of 2021.
How are you doing? I hope you are well. I know I haven't shared any articles for the last 8 weeks. My sincere apologies. My silence was due to adjusting to a number of things in the background. In the fullness of time, I will share some of the things that I have been doing. So, back to this week's article (as you know, I share an article every Monday)...

Your Life Can Be Meaningful! 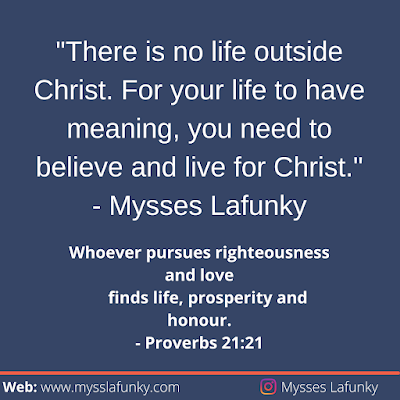 Some people live their lives as if they own their lives; forgetting that God owns their lives. He created you and gave you life. That's right! Do you know that you have to give an account of your life to God? The Book of Romans 14:12 says "then, each of us will give an account of himself to God." How are you living your life? Every single day of your life is being seen by God, even your thought is seen and known by God (Psalm 139).
Are you conscious of how you are living? Or do you feel nobody sees or knows what you are doing, or that nobody sees the state of your heart? Thus, you can hide things from others. The Book of Luke 8:17 says "For there is nothing hidden that will not be disclosed, and nothing concealed that will not be known or brought out into the open."
I would like you to know that God's free gift (that is, God's remarkable, overwhelming gift of grace to believers) can help you to enjoy this life on earth. Christ died for you so that your life on earth can have meaning. Likewise, so that you can make heaven, eternal life in Christ Jesus our Lord is waiting for those who believe and live for Christ. Matthew 7:21 says "Not everyone who says ‘You are my Lord’ will enter the kingdom of heaven. The only people who will enter the kingdom of heaven are those who do the things that my Father in heaven wants."
Have you surrendered your life to Christ? Have you surrendered unto God the things that you know that God will not be pleased with? To believe in Christ means you must be ready to live for Christ. You must be ready to give up those things that are not of God. You must be ready to do the things that God wants even if it will cost you.
Christ has sent the Holy Spirit to help you live a life that has meaning on this earth, and a life that will lead to eternal life. Are you allowing the Holy Spirit to lead you? Or are you leading yourself? Leading yourself will destroy your soul as that is the aim of the devil. His plan is to steal, kill and destroy (John 10:10a). 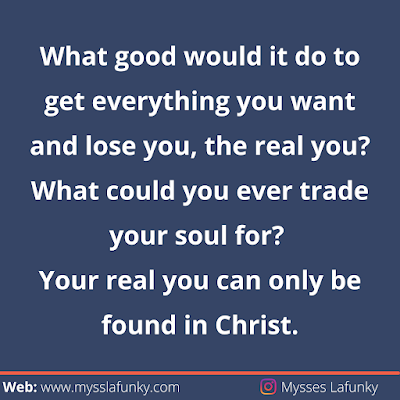 Learn How to Set Your Daily Priorities

Hello Readers & Followers,
How are you doing? I hope you are well. I'd like to apologise for not publishing a post last week, I had a busy week. Today's post is about setting our priorities. 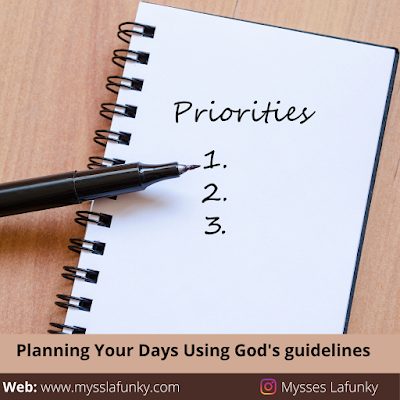 Teach Your Children About Their Identity In Christ

Week 1 - 4 Bible Verses about Your Identity In Christ

Week 3 - Christ Has Set You Free From Sin

Week 4 - Are You Ready For The End Of The World?

The focus of my post is to remind Christian parents of young children that they have a tremendous responsibility to teach their children about the Word of God, their identity in Christ and to lift up their children in prayer unto God. 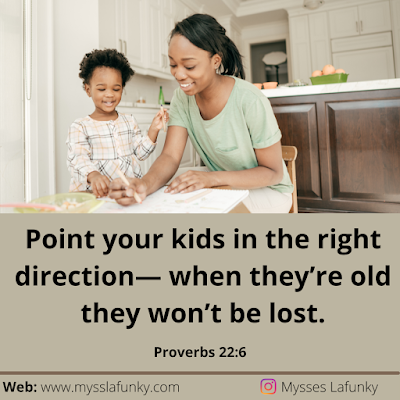