The Power of the Holy Spirit

How are you doing? Hope you had a lovely weekend. It's a New Week! Glory be to God in the Highest! This week's article is about the Power of the Holy Spirit.

Who is the Holy Spirit? The Holy Spirit is part of the Trinity and Jesus Christ identified the position of the Holy Spirit as the same as the Father and the Son. Let me share some Bible verses to buttress my points. The Scripture says in 1 John 5:7 "For there are three that bear witness in heaven: the Father, the Word, and the Holy Spirit; and these three are one."

Jesus told us in Matthew 28:19 that we should "Go therefore and make disciples of all the nations, baptizing them in the name of the Father and of the Son and of the Holy Spirit." 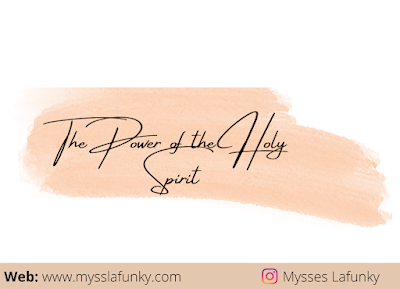 God Can Stir Up the Heart of Non-Christians

Let me share a story in the Bible with you. There was an ungodly king called Cyrus that reigned in Persia from 559 to 530 (B.C - BC stands for Before Christ). He wasn't an Israelite neither did he believe in the God of Israel. The Bible recorded something amazing that happened to Ezra in the Book of  Ezra 1:1-2. It says:

"The Lord stirred up the spirit of Cyrus king of Persia so that he made a proclamation throughout all his kingdom, and also put it in writing, saying, Thus says Cyrus king of Persia: All the kingdoms of the earth the Lord God of heaven has given me. And He has commanded me to build Him a house at Jerusalem which is in Judah."

Did you notice what king Cyrus said above? He said the Lord God of heaven has commanded him to build a house for Him in Judah. This was a man that did not believe in the Lord God of Israel but because the Lord stirred up his spirit, God used Cyrus to establish His sovereign plans on earth.

King Cyrus further stated in Ezra 1:3 that: "Who is among you of all His people? May his God be with him, and let him go up to Jerusalem which is in Judah, and build the house of the Lord God of Israel (He is God), which is in Jerusalem."

There are a number of lessons that you can learn from how God stirred up the spirit of an ungodly king. Let me share a few and please feel free to add more lessons to it:

1b) Also, God can stir up the heart of anyone to favour you. You do not need to have a special relationship with the person before God uses them to favour you.

2) It is not by accident that people accomplish God's purpose for their lives. Did you know that 100 years before Cyrus accomplished an assignment for God, Prophet Isaiah had prophesied that Cyrus will be a shepherd for God and he will do what God says and he will play a role in rebuilding Jerusalem and restoring the temple (Isaiah 44:28)?  This is quite encouraging to know that God's desire is to cause His children to accomplish His work on earth. Although I believe sin in an individual's life could delay God's plans for their lives from being fulfilled or for the plans to be cut short (Deuteronomy 28:15). Therefore, it is advisable for you to keep walking in obedience to God's Word so that His plans for your life can be fulfilled as He intends them to be.

3) Don't be too quick to dismiss what a non-christian tells you. Take time to examine their advice in line with the Word of God, and also ask God to speak to you concerning what someone has said even if they are a Christian.

Are there other lessons that you could pick out from how God stirred up the spirit of Cyrus? Please, take a minute to share by leaving a comment.