Let me share 6 examples of healing that occurred immediately when Jesus Christ was present or His name was mentioned:

1. Then Jesus said to Bartimaeus, “Go your way; your faith (confident trust in My power) has made you well.” And immediately he received his sight and followed Jesus on the road (Mark 10:52). You can read Mark 10:47-52 to understand the account better.

2. There he found a certain man named Aeneas, who had been bedridden eight years and was paralyzed. And Peter said to him, “Aeneas, Jesus the Christ heals you. Arise and make your bed.” Then he arose immediately. So all who dwelt at Lydda and Sharon saw him and turned to the Lord (Acts 9:33-35).

So Jesus stood still and called them, and said, “What do you want Me to do for you?”
They said to Him, “Lord, that our eyes may be opened.”  So Jesus had compassion and touched their eyes. And immediately their eyes received sight, and they followed Him (Matthew 20:30-34). 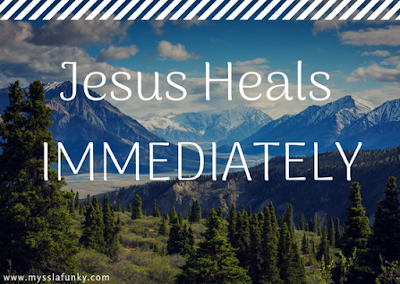 4. But when Peter saw the strong wind, he became frightened. As he began to sink, he shouted, “Lord, rescue me!”

Jesus immediately reached out and grabbed him, saying, “You man of weak faith! Why did you begin to have doubts?” When they got into the boat, the wind settled down (Matthew 14:30-32).

5. And behold, a leper came and worshipped Him, saying, “Lord, if You are willing, You can make me clean.”
Then Jesus put out His hand and touched him, saying, “I am willing; be cleansed.” Immediately his leprosy was cleansed.
And Jesus said to him, “See that you tell no one; but go your way, show yourself to the priest, and offer the gift that Moses commanded, as a testimony to them.” (Matthew 8:2-4).

6. Now a woman, having a flow of blood for twelve years, who had spent all her livelihood on physicians and could not be healed by any,  came from behind and touched the border of His garment. And immediately her flow of blood stopped.

And Jesus said, “Who touched Me?”

When all denied it, Peter and those with him said, “Master, the multitudes throng and press You, and You say, ‘Who touched Me?’ ”

But Jesus said, “Somebody touched Me, for I perceived power going out from Me.” Now when the woman saw that she was not hidden, she came trembling; and falling down before Him, she declared to Him in the presence of all the people the reason she had touched Him and how she was healed immediately.
And He said to her, “Daughter, be of good cheer; your faith has made you well. Go in peace.” (Luke 8:43-48).

The charge for this week is for you to pray for anyone that you know that is sick and declare the healing power of God concerning their life.