Are You A Chronic Grumbler?

How is your new week going? Can you believe it's less than 5 weeks before it's Year 2015? I want you to take this opportunity to thank God for all He has done for you and your family. You might still be waiting for the manifestation of some of your prayers, nonetheless, still thank God for the gift of life and for all.

As you are aware, God is currently teaching and pruning me about James 5:9 - Do not grumble against one another, brothers and sisters, or you will be judged.
I haven't been doing too bad actually. I am speaking less, I consciously change the subject, I am also bold to state that 'I don't want to talk about that issue as it would not glorify God'.

As part of God's teaching, God opened my eyes to Romans 2:1-3 which states that:

Now we know that God's judgement against those who do such things is based on truth.  So when you, a mere human being, pass judgement on them and yet do the same things, do you think you will escape God's judgement?"

We all need to come to terms with the above scriptures. You need to ask yourself the following questions:

Why is it tempting for me to be critical of others?

What is the effect?

What situation allows me to be critical and grumble against others?

Are you less tolerant of other people when they fall?

Have you ever thought that grumbling against others and judging others feed your appetite of self-righteousness?

I recognise that grumbling against others and condemning others is so appealing and this sin is affecting Christians, a lot of us focus only on sexual immoralities as the only sin and we forget about the rest.

Don't be a Grumbler. 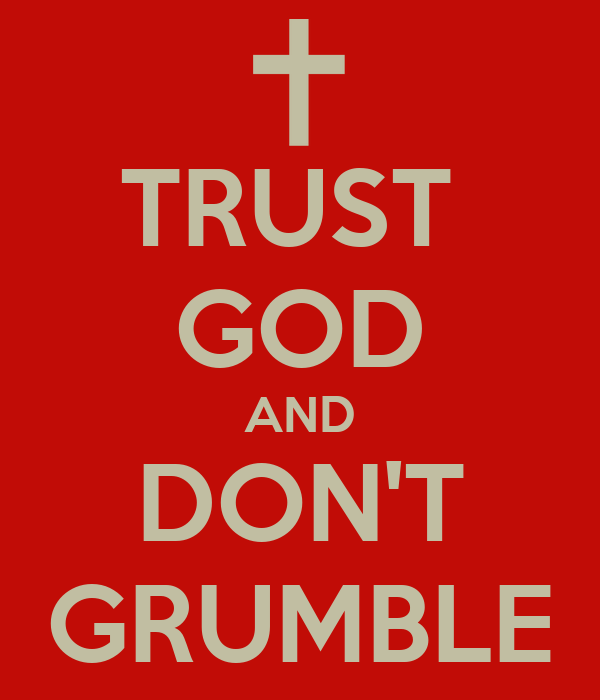 Characters in the Bible that grumbled
After God miraculously rescued the Israelites out of slavery in Egypt and they were free in the wilderness, they started grumbling about everything- the lack of food and water. They didn't like Moses as their leader.

They grumbled against the Lord, not Moses (Exodus 16:6-8). Do you know what God did to them?
God declared that the adults who left Egypt would not even set foot in the promised land because of their rebellious grumbling (Numbers 14:26-32). This shows us that, God is against grumbling, it can harden our hearts toward God.

Next time you are tempted to grumble or complain about others, change it to praise or focus on yourself.

Enjoy the rest of your week.