Freedom Series: The Red Pill or the Blue Pill

I want to start by painting a picture. At the dawn of a new millennium, a movie titled "The Matrix" was released. In this movie, the main character called Neo was presented with a choice. A red pill, in a red capsule, that would wake him up from his dreams to the reality of what the matrix really was or a blue pill, in a blue capsule, that would put him back to sleep and would cause him to forget all he had been told and put him back to sleep in the matrix. Imagine you were Neo and you were faced with a choice: the red pill or the blue pill. What would you choose? Before you answer, let me break down these pills for you.

Chemistry tells us that pills are made up of certain chemicals that are mixed together in order to achieve a certain outcome, mostly curing a disease and these pills can be in the form of capsules or tablets. The chemicals in the red capsule would give you freedom from the matrix; freedom to determine your own destiny, freedom not to be controlled by others, in this case the matrix. The chemicals in the blue capsule would give you a life of oppression, to be controlled by others, unable to determine your own destiny (in this case the matrix). Which pill would you choose? As strange as it may sound, some would choose the blue pill (someone in the movie did) but I would definitely go with the red pill just like Neo did. To know what became of him, watch the Matrix series. Now that I think of it, the whole essence of the Matrix was a fight for freedom; freedom from the matrix and the machines that controlled the matrix.

Life is all about choices. Even when it seems like we have no choice, we still have a choice. In our daily lives, we make decisions that determine if we want to be free or if we want to be oppressed. The lure of freedom is the illusion of action without consequences; a life free of responsibility. A life in which we can decide what we want to wear or eat, a life in which drinking alcohol or smoking cigarettes come with no repercussions. Alas dear friends, time will prove this illusion to be naught but ash.

So what is freedom? Freedom according to Myles Munroe is an attitude. It is not guaranteed, it must be earned. Responsibility is the pre-requisite for freedom. Strange? Well let’s walk down memory lane to my days of studying International Relations. As human beings, we have certain inalienable rights but your rights are limited to your sphere of influence. As my lecturer said, your right to swing your fists is limited by its proximity to my chin. Meaning you’re free to swing your fists but you’re also responsible in ensuring that they don’t hit me.

Let’s take a deeper look into freedom. The whole essence of Christianity is to set us free. Jesus came to set us free from oppression. In essence, He came to give us the red pill. Gal. 5:1 (NIV) says: It is for freedom that Christ sets us free. History is littered with stories of people's thirst for freedom (a King once took 300 men against an entire army for freedom’s sake). Yes it is that much of a big deal!
God's desire for us His children to live a life of freedom. A life free from oppressions and slavery. One story that reflects God's desire for us to be free is that of the Israelites and their exodus from Egypt. When God heard the pains His children were going through, it caused Him to remember His covenant (Ex. 6:5, NIV) and as a result of that, He sent them Moses. God has no desire to see us in bondage and in the New Testament, he sent another deliverer in His son Christ Jesus to free us from the oppression of the devil. 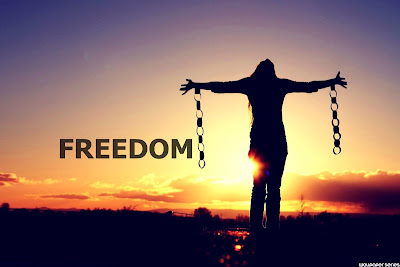 Does freedom come with responsibilities? Yes it does. When Christ came down to set us free, He also gave us responsibilities. Luke 9:62 (NIV) says: Jesus replied, “… fit for service in the kingdom of God.” This tells us that as we get the gift of freedom, we need to be ready to serve God.

Does that sound like responsibilities yet? Let’s look at the world. One thing I like about the Americans is that they know their rights and no one can deny them those rights. That is one country that has gone to war to protect its rights and freedom. Despite this, they expect their citizens to be upright and responsible; meaning you’re free to drive but you’re not free to hit another person’s car. You’re free to own a gun but you’re not free to shoot people except in certain defined circumstances laid down in the American Constitution. How much then the body of Christ? Let us look at the ministry of Jesus to get an answer. After Jesus had selected His 12 disciples and freed them from their chains, He didn’t say to them: okay now you’re free go and sleep for the rest of your life or now you’re free, do as you please. No! Instead He gave them work to do in Matt. 10:5-8 (NIV):
5. These twelve Jesus sent out with the following instructions: “Do not go among the Gentiles or enter any town of the Samaritans. 6. Go rather to the lost sheep of Israel. 7. As you go, proclaim this message: ‘The kingdom of heaven has come near.’ 8. Heal the sick, raise the dead, cleanse those who have leprosy, drive out demons……..
Yup! That sounds like a lot of work. As a disciple under Jesus, let us list out their responsibilities:

These are definitely not easy tasks to do but still, He gave it to them. One man that fully understood the amount of responsibility that comes with freedom was Paul. Paul was a Roman citizen so he had a lot of freedom but he never lost sight of his responsibilities. Paul in 1Cor.8:9-13 said:
9. Be careful, however, that the exercise of your rights does not become a stumbling block to the weak. 10. For if someone with a weak conscience sees you, with all your knowledge, eating in an idol’s temple, won’t that person be emboldened to eat what is sacrificed to idols? 11. So this weak brother or sister, for whom Christ died, is destroyed by your knowledge. 12. When you sin against them in this way and wound their weak conscience, you sin against Christ. 13. Therefore, if what I eat causes my brother or sister to fall into sin, I will never eat meat again, so that I will not cause them to fall.
Paul in Rom. 14:13, 15-18 & 21 (NIV) (I would advise you to read the entire Rom. 14) said:
“13………Instead, make up your mind not to put any stumbling block or obstacle in the way of a brother or sister. 15. If your brother or sister is distressed because of what you eat, you are no longer acting in love. Do not by your eating destroy someone for whom Christ died. 16. Therefore do not let what you know is good be spoken of as evil. 17. For the kingdom of God is not a matter of eating and drinking, but of righteousness, peace and joy in the Holy Spirit, 18. because anyone who serves Christ in this way is pleasing to God and receives human approval… 21. It is better not to eat meat or drink wine or to do anything else that will cause your brother or sister to fall.”
Some might say that it is extreme. He went as far as saying that he would deny himself meat just to make sure his brother does not sin. In modern times, we can look at the British royal family. Despite their wealth, they try to be exemplary in their lifestyle as a result of the awareness of their duty to the people of Great Britain. As children of God, we are no longer living for ourselves but for God (Rom. 14:7) and if we are living for God, we have to live a life that does not deny another person the opportunity to live for God. When you follow this school of thought, you will realize that freedom from the chains of the devil comes with the responsibility of ensuring others are freed from their oppression. When you begin to think of this, you will realize the number of things you’ll have to deny: alcohol; secular music; certain types of clothes; movies ... the list is endless really and it goes as far as denying meat which is sweet to eat. What are you willing to deny yourself for the sake of a brother or sister?

- Sage
Sage is a graduate of human resource management and a 24/7 salesman. A clay in the hands of the Potter, he is on a journey to knowing God and becoming the man God has called him to be. He has a passion for football and society at large. In his quest for knowledge, he has recently restarted his passion for reading books. He lives in Lagos, Nigeria.
Posted by Mysses Lafunky at 07:00