The Analogy of the Bones

I was contemplating on what to post on the blog this week; I was waiting for the Holy Spirit to instruct me on what to publish this week. You won't believe what happened; one of my writers contacted me, he explained how God taught Him about the allegory of the dry bones and God gave him the go ahead to write and also publish it. What an awesome God! God purposely delayed speaking to me because He had prepared Sage to teach us this week.

I hope you are excited to read this captivating post. My bible knowledge was actually challenged as I read the post. I had always thought the bones became human beings...actually, let me not give everything away.

A quick introduction...Sage is the author of What Men Really Want and You Are Exceptional.

The Analogy of the Bones...
At the beginning of the year, I decided I was going to start taking practical steps in my goal of educating the minds of others (myself included). So here is my third attempt at digging into the word and writing about it.
This analogy came to me during a Sunday Service in which my pastor preached on dry bones. During the message, I sat there wondering: whatever happened to the dry bones? What happened to the army that was created from those dry bones? They couldn't have simply vanished. Or could they? When you watch Nigerian movies, you watch how people just suddenly disappear only to re-appear in a shrine or in the case of Pirates of the Caribbean, gone to the other world to save Jack Sparrow or retrieve some goblet to drink water and stay forever young. Why did they need those exact goblets! Speaking of bones, I just remembered the Curse of the black pearl and how Barbosa and his crew turned to skeletons under the moonlight. I'm digressing.
While I was thinking of all this, I heard the pastor mention that it was a dream and I went oh, I see! So Ezekiel was dreaming all along and all these years I assumed it was real. Like Ezekiel was walking and actually stumbled on a valley of dry bones and then proceeded to resurrect them as instructed by God. That would be really awkward. How do you start explaining to them that God rose them up from the dead? How do you explain to people that an army that had been dead for so long their bones had dried up? What would you name each individual? 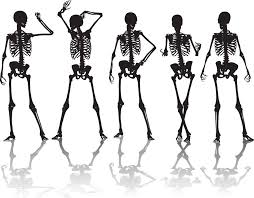 Let me be very honest, before I arrived at this point of revelation, I was actually sleepy and wondering how I would last the length of a sermon that had barely started. Thank God for the gift of revelation. In trying to battle the drowsiness, it hit me (revelation that is). At this moment, let’s flip to Ezekiel 37:1-14. In reading the first two verses, you notice that it was God that led him to that valley. Of all the valleys, it was the one that had dry bones that he was led to not the one overflowing with gold coins or milk and honey; there’s a very good reason. Let’s see:
1 The hand of the Lord was on me, and he brought me out by the Spirit of the Lord and set me in the middle of a valley; it was full of bones. 2 He led me back and forth among them, and I saw a great many bones on the floor of the valley, bones that were very dry.
One thing we should pick out is not just the fact that the valley was full of bones but of bones that were very dry. Meaning they have been there for a very long time and the sun has done a number on those bones. If this was a pirate movie, it would have been called ‘Bones Valley’ (or some sinister hilarious name). Let’s call it Bones Valley…….power of the pen ☺. Ezekiel was in Bones Valley with the Lord and you can be sure there was going to be a test. Time for Vs.3
3 He asked me, “Son of man, can these bones live?” I said, “Sovereign Lord, you alone know.”
When my pastor read this verse, I smiled: sharp guy! He threw the question back to God on a coded level and thought he had scaled the test successfully. As people we like forming sharp or that na Warri sharp pass (Warri no dey carry last), God will always be sharper. Ezekiel didn’t know that was just question 1. So let’s see what question 2 was. God then said:
4 “Prophesy to these bones and say to them, ‘Dry bones, hear the word of the Lord! 5 This is what the Sovereign Lord says to these bones: I will make breath enter you, and you will come to life. 6 I will attach tendons to you and make flesh come upon you and cover you with skin; I will put breath in you, and you will come to life. Then you will know that I am the Lord.’”
Thankfully, as Vs. 7 & 8 showed, he passed the second test and did as he was instructed. Then came the final test question, as if the previous questions had not been testing enough, God then instructed him to prophecy breath into the bones. I’m sure most of us by now would have gone: Breath?! Into these bones! You first asked me if the bones can live, as a sharp guy I said: you alone knows. You then asked me to prophecy life and flesh into the bones, so I don’t seem stubborn or lacking in faith I did as commanded. Now you’re telling me to speak breath into these bones. Na wa for you oooooo! However, Ezekiel had reached the point of revelation and understanding and passed with flying colors (37:10). What is important to note here is that it is very important as Christians to reach the point of understanding and revelation, otherwise we will respond like Ezekiel did in 37:2. 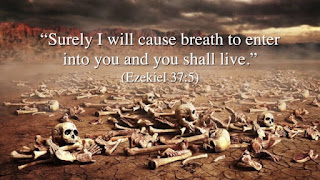 By now, I’m guessing some of you would be wondering like I was in service: what does dry bones have to do with anything. What do dry bones stand for?! I submit to you as my pastor did that dry bones are those issues and problems we face in life on a daily basis. From things like money to buy food to things like being delivered from barrenness or the woman with the issue of blood. Let’s see Matthew 15:22-28. This was a woman with a very dry bone in her life:
22 A Canaanite woman from that vicinity came to him, crying out, “Lord, Son of David, have mercy on me! My daughter is demon-possessed and suffering terribly.”
She was going through a lot, God been a merciful God, you would think He would have gone: Be Healed! Naaaa. He first tested her, in order to see her level of faith and trust in Him. In vs.23, you’ll realize that despite her pleas, Jesus did not answer her. How would you feel if you went to your parents to ask for something you desperately need, let’s say school fees, and they continue watching TV like you don’t exist? But because the woman knew the bone in her life and been desperate to leave Bones Valley, she didn’t give up. Eventually Jesus responded. You’d think, alas He has answered her and her moment of deliverance is at hand. Wrong! Then came test number two:
24 He answered, “I was sent only to the lost sheep of Israel.”
Imagine that. Just imagine. At this point some of us would have given up or even worse, resorted to insults. What did this giant of faith do? She cried even more and even knelt down (Vs. 25). Then came the final test, test number three:
26 He replied, “It is not right to take the children’s bread and toss it to the dogs.”
Ah Ah. Even in my church when the pastor read this verse, you could hear the gasps in the room. Na wa. At this point most of us would have responded in anger (myself included; I know right). But what happened, this daughter of Zion had before approaching Jesus entered the place of revelation and understanding. Read what she said:
27 “Yes it is, Lord,” she said. “Even the dogs eat the crumbs that fall from their master’s table.
Wow. As in wow. Aunty you try no be small and of course as a result of passing the test, her dry bones were brought to life. Oddly enough as I’m writing this, I just realized that in the cases of these two stories, they were tested three times just to see the level of their faith. Another person that was in Bones Valley was Philip in John 6:4-7. Like John 6:6 tells us, Jesus already knew what he was going to do but he needed to test the faith of those around Him. 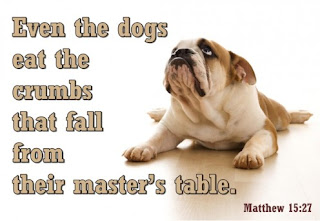 What is important to notice is that as children of God, there will be times when we are stuck in Bones Valley. It is not because God does not love us or because He doesn’t care for us but because He wants to build up your faith and trust in Him. The only way out is for you to hold fast, grow in faith and trust and know that no matter how dry the bones or how full your valley is, there is a God who can give flesh to those bones and bring them to life. When next you read the Hall of Faith (Hebrews 11), take note of the bones those great men and women of faith had. I can thus submit to you that until you pass the test of faith, you’ll continue to wallow in Bones Valley.
What are those bones (issues or problems) in your marriage? In your relationship? In your career? In your finances? In your health? In your ministry? Trust in God, be steadfast in your faith and see your bones come to life. Stay blessed!

Sage is a graduate of human resource management and a 24/7 salesman. A clay in the hands of the Potter, he is on a journey to knowing God and becoming the man God has called him to be. He has a passion for football and society at large. In his quest for knowledge, he has recently restarted his passion for reading books. He lives in Lagos, Nigeria.