Is Pride Lurking In Your Heart?

I hope you had a lovely weekend. My weekend was full of a number of activities which I thoroughly enjoyed. Yesterday was also beautiful as I spent time with our church family. I didn't feel like leaving church. It was such a great time in God's presence and with God's people. 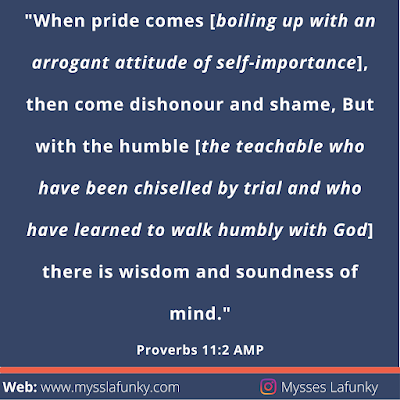 Pride makes you see yourself as greater than you are. It gives you an unrealistic view of yourself. Pride also makes you to be very critical of others. The Lord isn't keen on those that are proud. Proverbs 16:5 says "Everyone that is proud in heart is an abomination to the Lord; though they join hands, they shall not go unpunished."

Let me share a story in the Bible about a Commander of the Syrian armies with you:

In 2 Kings 5:11-12, the Word of God says "But Naaman went away angry and said, "I thought that he would surely come out to me and stand and call on the name of the Lord his God, wave his hand over the spot and cure me of my leprosy.

Are not Abana and Pharpar, the rivers of Damascus, better than all the waters of Israel? Couldn't I wash in them and be cleansed? So Naaman turned and went off in a rage."

Naaman's response was filled with pride. He was an important man with a high rank in the army but he had leprosy. He needed a miracle from God, for God to heal him of the 'but' in his life.

God is a healer and He still has the ability to heal anyone of their weaknesses and sicknesses.

Naaman got so angry when he heard about how God was going to heal him. He wasn't too keen on how Elisha said he was going to be healed. He also wasn't keen that Elisha had sent a note to inform him of how he was going to be healed. His anger stemmed from pride. He was offended that Elisha did not come but sent a note to him. He was also angry at what God expected him to do and where he was expected to do it. Naaman felt he knew better.

Take a pause and read Naaman's reply above which was full of pride. He felt extremely important and he was so offended that he went away in a rage. Why? Because he felt what Elisha had informed him to do was below him and wouldn't make him feel important.

God was going to use this incident to heal Naaman of his pride and leprosy but God wanted Naaman to humble himself first. Did Naaman eventually humble himself?

2 Kings 5:13-15 says "Naaman’s servants went to him and said, My father, if the prophet had told you to do some great thing, would you not have done it? How much more, then, when he tells you, Wash and be cleansed. So Naaman went down and dipped himself in the Jordan seven times, as the man of God had told him, and his flesh was restored and became clean like that of a young boy.

Then Naaman and all his attendants went back to the man of God. He stood before him and said, Now I know that there is no God in all the world except in Israel. So please accept a gift from your servant.”

Do you know that if Naaman had not humbled himself, he would have lost the blessings that the Lord had in store for him?  HOW Naaman got healed should be something for you to reflect on today.

As I mentioned at the beginning of this write-up, are you able to say this prayer to God: "Lord Jesus, search me and show me the state of my heart, please reveal to me where pride is lurking in my heart."

Yours in Christ,
Mysses Lafunky
I have a free e-book for you. The book (15 Women of the Bible: How they lived a Purpose-Driven Life). This e-book was written by my Bible Study Group. To download it on Google Drive for free, click here.