How was your weekend? I hope you had a lovely weekend. I have been asked by the Holy Spirit to complete a series on Repentance with Mysses Lafunky's followers including my Bible Study group members. 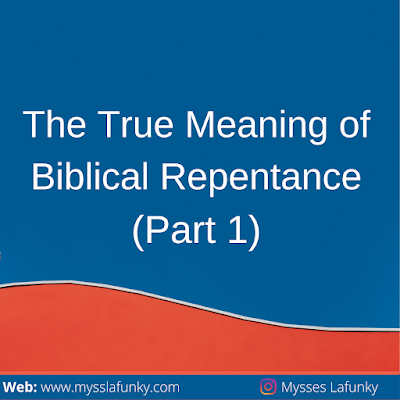 The very first thing Jesus preached was Repentance. In Matthew 4:17, Jesus said, "Repent for the kingdom of heaven has come near."

WHAT DOES IT MEAN TO REPENT?

To Repent is to:

To not repent is to do the opposite of the above.
Take a pause now and reflect on what it means to repent. Have you been practising biblical repentance?

Let's learn about Repentance from the life of David and Saul

Story: In the Book of 2 Samuel 12:1-24, the Lord sent Prophet Nathan to David. Nathan shared a story about a rich man with David. He explained to David that the rich man used the only ewe lamb owned by a poor man to entertain his guest despite the fact that the rich man owned many cattle.
When David heard what Nathan had shared with him, David became furious, he said to Nathan that the rich man must die and he must repay four times over for the lamb that he had used.
Confrontation: David did not realise that God was confronting him for his own sin. Nathan said to David, “You are the man! This is what the Lord, the God of Israel, says: ‘I anointed you king over Israel, and I delivered you from the hand of Saul.  I gave your master’s house to you, and your master’s wives into your arms. I gave you all Israel and Judah. And if all this had been too little, I would have given you even more.
Why did you despise the word of the Lord by doing what is evil in his eyes? You struck down Uriah the Hittite with the sword and took his wife to be your own. You killed him with the sword of the Ammonites. Now, therefore, the sword will never depart from your house, because you despised me and took the wife of Uriah the Hittite to be your own."
This is what the Lord says: "Out of your own household I am going to bring calamity on you. Before your very eyes, I will take your wives and give them to one who is close to you, and he will sleep with your wives in broad daylight. You did it in secret, but I will do this thing in broad daylight before all Israel." ( 2 Samuel 12:7-12 NIV version).
Attitude: Then David said to Nathan, “I have sinned against the Lord.” (2 Samuel 12:13 NIV version).
Nathan replied, “The Lord has taken away your sin. You are not going to die. But because by doing this you have shown utter contempt for the Lord, the son born to you will die.”

After Nathan had gone home, the Lord struck the child that Uriah’s wife had borne to David, and he became ill. David pleaded with God for the child. He fasted and spent the nights lying in sackcloth on the ground. The elders of his household stood beside him to get him up from the ground, but he refused, and he would not eat any food with them.

On the seventh day, the child died. David’s attendants were afraid to tell him that the child was dead, for they thought, “While the child was still living, he wouldn’t listen to us when we spoke to him. How can we now tell him the child is dead? He may do something desperate.”

David noticed that his attendants were whispering among themselves, and he realised the child was dead. “Is the child dead?” he asked.

Then David got up from the ground. After he had washed, put on lotions and changed his clothes, he went into the house of the Lord and worshipped. Then he went to his own house, and at his request, they served him food, and he ate.

His attendants asked him, “Why are you acting this way? While the child was alive, you fasted and wept, but now that the child is dead, you get up and eat!”

He answered, “While the child was still alive, I fasted and wept. I thought, ‘Who knows? The Lord may be gracious to me and let the child live.’ But now that he is dead, why should I go on fasting? Can I bring him back again? I will go to him, but he will not return to me.”

Then David comforted his wife Bathsheba, and he went to her and made love to her. She gave birth to a son, and they named him Solomon. The Lord loved him.

WHAT CAN WE LEARN FROM DAVID'S ATTITUDE TOWARDS REPENTANCE?

1) After David was confronted with his sin, he immediately surrendered to God and acknowledged that he had sinned against God.
Let me share a personal experience with you. There was a time the Lord reminded me of a sin that I committed when I was in secondary school. The Lord reminded me that I had stolen a fashion ring from a shop and He asked me to visit the city to repay the cost of the ring that I had stolen over a number of years ago. I was grateful that the Lord had reminded me. I apologised to God, and I took a trip to the city and visited the shop and I confessed my past sin to them and I repaid the cost of the ring. The sales staff thought I was foolish as they couldn't fathom why someone would do what I did. Nevertheless, they said they were in awe as they had never seen such an act being done before.
2) David listened to the voice of God through Prophet Nathan. David knew Prophet Nathan was not lying.
Are there other lessons that you can learn from the attitude of David towards repentance?

Now, let's move on to the life of King Saul

Story: In the Book of 1 Samuel 15:10-30, the Bible recorded that King Saul did not follow the instructions that he was given by God.
"The word of the Lord came to Samuel:  “I regret that I have made Saul king because he has turned away from me and has not carried out my instructions.” Samuel was angry, and he cried out to the Lord all that night.

Early in the morning Samuel got up and went to meet Saul, but he was told, “Saul has gone to Carmel. There he has set up a monument in his own honour and has turned and gone on down to Gilgal.”

When Samuel reached him, Saul said, “The Lord bless you! I have carried out the Lord’s instructions.”

Confrontation: But Samuel said, “What then is this bleating of sheep in my ears? What is this lowing of cattle that I hear?” (1 Samuel 15:10-14).
Attitude: Saul answered, “The soldiers brought them from the Amalekites; they spared the best of the sheep and cattle to sacrifice to the Lord your God, but we totally destroyed the rest.”
“Enough!” Samuel said to Saul. “Let me tell you what the Lord said to me last night.”

Samuel said, “Although you were once small in your own eyes, did you not become the head of the tribes of Israel? The Lord anointed you king over Israel. And he sent you on a mission, saying, ‘Go and completely destroy those wicked people, the Amalekites; wage war against them until you have wiped them out.’ Why did you not obey the Lord? Why did you pounce on the plunder and do evil in the eyes of the Lord?”

“But I did obey the Lord,” Saul said. “I went on the mission the Lord assigned me. I completely destroyed the Amalekites and brought back Agag their king. The soldiers took sheep and cattle from the plunder, the best of what was devoted to God, in order to sacrifice them to the Lord your God at Gilgal.”

“Does the Lord delight in burnt offerings and sacrifices
as much as in obeying the Lord?
To obey is better than sacrifice,
and to heed is better than the fat of rams.
For rebellion is like the sin of divination,
and arrogance like the evil of idolatry.
Because you have rejected the word of the Lord,
he has rejected you as king.”

Then Saul said to Samuel, “I have sinned. I violated the Lord’s command and your instructions. I was afraid of the men and so I gave in to them. Now I beg you, forgive my sin and come back with me, so that I may worship the Lord.”

But Samuel said to him, “I will not go back with you. You have rejected the word of the Lord, and the Lord has rejected you as king over Israel!”

As Samuel turned to leave, Saul caught hold of the hem of his robe, and it tore. Samuel said to him, “The Lord has torn the kingdom of Israel from you today and has given it to one of your neighbours—to one better than you. He who is the Glory of Israel does not lie or change his mind; for he is not a human being, that he should change his mind."
Saul replied, “I have sinned. But please honour me before the elders of my people and before Israel; come back with me, so that I may worship the Lord your God.” (1 Samuel 15:15-30).

WHAT CAN WE LEARN FROM SAUL'S ATTITUDE TOWARDS REPENTANCE?

1) Saul's initial attitude was to blame the soldiers (1 Samuel 15:15). He didn't take responsibility for the fact that God had given him the instruction.
2) After Samuel confronted Saul, Saul did not immediately have a change of heart. He kept rationalising how the actions that he undertook should be seen as obedience unto God until Samuel explained to him that he had rejected the word of the Lord and he did not obey fully.
3) After Saul was informed of what the consequences of his sin would be, he became remorseful. We do not need to wait to understand the consequences of sin before we turn to God and change our hearts toward a particular sin.
When we fall short of God's Word, God wants us to call upon Him.
Hebrews 4:16 says "Let us, therefore, come boldly to the throne of grace, that we may obtain mercy and find grace to help in time of need."
1 John 1:9 says "If we [freely] admit that we have sinned and confess our sins, He is faithful and just [true to His own nature and promises], and will forgive our sins and cleanse us continually from all unrighteousness [our wrongdoing, everything not in conformity with His will and purpose]."
God loves all people and desires to share His forgiveness and mercy with all peoples of the earth, based upon repentance. John the Baptist acknowledged the universality of the love of God in John 1:29b which says "Behold! The Lamb of God who takes away the sin of the world!"
I hope you have gained something new from reading this article. Watch out for Part 2 of this series on Repentance. Part 2 will be published on Monday (6th of December 2021).
Also, I love hearing from you in the comment section. Please take a minute to say ‘hello’ by leaving a comment.
Have a lovely week!
Yours in Christ,
Mysses Lafunky