How is your new week going? I hope you were able to rest during the weekend.  Today, I will be sharing some of the lessons that I have learned from the life of Esther. 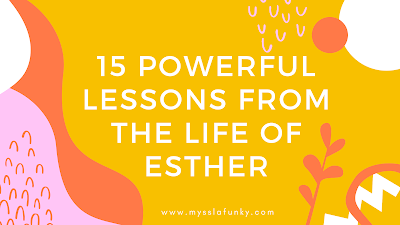 5) Esther listened and honoured her uncle (Mordecai) when he sent a message back to her saying: "Do not imagine that just because you are in the king's palace you will be any safer than all the rest of the Jews (Esther 4:13)". However, Mordecai told her that she was part of the kingdom for such a time as this (Esther 4:14). Do you know that God has kept you alive to undertake something for Him? Are you undertaking what He has asked you? Can you do better?

6) Esther was reminded of her purpose by her uncle and she fulfilled it. Sometimes, God will ask people to remind you of your purpose or a particular task that He would like you to undertake as part of your calling. Be attentive and always ask God for clarity.

7) Despite being an orphan, Esther was tremendously used by God. Esther's background was not a hindrance to being great in life. Everything worked out for her good.

8) Esther did not forsake her identity nor neglect her people (Jews). Her identity meant a lot to her. The same way Moses identified with his people despite growing up in Egypt/the King's palace. Are you forsaking your identity due to your current environment?

9) Although God and the Holy Spirit were not mentioned directly in the book of Esther, the power of God was in action such as; the boldness of Esther to approach the king. This can be linked to Proverbs 28:1b which says: "The righteous are bold as a lion." The fasting also reminded me of what Jesus said in Matthew 17:21: "some prayers cannot be answered except by prayer and fasting".

10) Esther worked as a team with her people and she knew the power of working together. She implemented the Scripture which says: "Again, truly I tell you that if two of you on earth agree about anything they ask for, it will be done for them by my Father in heaven (Matthew 18:19)." Esther implemented this by asking her uncle to inform her people to fast. She also sent one of her servants to her uncle.

11) Esther exemplified spiritual maturity in the place of waiting and working with God's timing before making her request to save her people.

12) Esther feared God and not men. She applied wisdom by fasting about the consequences that were in place if the king was approached unannounced. Her focus was on saving her people. This can be linked to Jesus Christ. He gave up His life so that you and I can be saved from eternal death and was highly exalted by God (Philippians 2:8-11). What are you focusing on?

13) It is not everything we are to disclose. The bible says that for every matter, there is a time and judgment (Ecclesiastes 8:6a). Esther did not disclose her Jewish identity until it was the right time. She revealed her identity until later on (Esther 2:20 and Esther 7:3).

14) Esther obtained grace and favour in the sight of the king (Esther 2:17). The king loved Esther more than all the other women. Grace and favour of God are beneficial in fulfilling God's plan for our lives.

15) Esther's request was granted by the king; her people were saved.

If you have been blessed by this post, please share it with your friends. You can also reference it as part of your bible study or your teaching.

Have a great week.