Welcome to another week! The weekend was exciting as I had another opportunity to attend my local Church service for an awesome time in God's presence. In the Hallelujah Challenge news, on the 28th of June, there will be a gathering of saints led by Nathaniel Bassey. Check his IG page for more details. If you can make it, please do. So many things are happening and it is necessary that we all key into them and not miss out on the move of God (Ps. 118:15). Also remember to check out our post from last week. As you all know, Sage is a fan of the Three Musketeers. I'm currently reading, twenty years later and our heroes: Athos, Aramis, Porthos and D’artagnan are about to make their escape from England. Paused that for now.

"Jesus answered and said to her, “Whoever drinks of this water will thirst again" John‬ 4:13‬ NKJV‬‬‬

Ever heard of a thirst trap? To be honest, I don't know if there's an official definition. I even googled it but the examples that were given won't make it past my editor so, there's no need to state them. Basically, it has to do with anything that is done with the purpose of getting the attention of the opposite sex. This is but one definition. For the purpose of this article, the thirst trap is anything that has been set with the intention of testing our Christianity and faith. This is the definition we will work with. How would you feel if I told you that Jesus set a thirst trap once upon a time? This is one of the earliest recording of a thirst trap in human history. Anyways I got the inspiration for this message from a message by Bishop TD Jakes in which he talked about the thirsty soul and an awesome podcast by Steven Furtick titled “The Thirst Trap”. Do check it out.

As human beings, it's in our nature to be thirsty from time to time, there's nothing wrong with it for God created us that way. Even Sprite had a slogan to take advantage of this natural feeling: Obey your Thirst. I mean, why won't I want to obey my thirst. Forget talk, when I'm thirsty, I look for any means possible to quench the thirst. Where is your mind going to? I'm referring to normal thirst oh! Hmm. To him that is pure, all things are pure (Titus 1:15). Just like Pst. Steven said in his message: "I'm just a thirsty man." Mine is so bad that my entire fridge is filled with bottled water. I remember a friend who once visited me opening my fridge and remarking "I've never seen a fridge filled with so much water." But that's me, Sage the Thirsty. Back to the point, there are other things we thirst for. The list is endless but I'll share a few: success, designer clothes, IG likes, Facebook friends, retweets, companionship, love etc. Quite an interesting list, right? Please feel free to add to it, we all drink somewhere to quench our thirst.
Now let's consider the Trap. There are different ways by which a trap is set. The most basic is someone posting a picture of themselves looking alluring on IG but then there are others. Remember earlier on I said that even Jesus set a thirst trap. Remember? If you ask me, I would consider Him the master trapper. Why? Because He knows what to do to get each and everyone of us. Alas, we're jumping ahead of ourselves. Let's examine some of the earliest thirst traps. Remember David? No not that David, I mean King David. Yeah, him, the great man, the man after God’s heart. He once found himself in a thirst trap. When? Remember that time his men went to battle? Sorry, there were many times his men went to battle. But there was this particular time his men went to battle and Oga D decided to stay back and enjoy his palace. Then one day, he opened his window and saw one fiiiiiine babe like that and…well let's see what the bible says:

Then it happened one evening that David arose from his bed and walked on the roof of the king’s house. And from the roof he saw a woman bathing, and the woman was very beautiful to behold. 2Samuel‬ 11:2‬ NKJV‬‬‬‬

A classic thirst trap right? What did David do? 2 Sam. 11:3-25 will give you the gist. But we can see that, the thirst trap is not a new thing.
Jesus, once upon a time set a thirst trap. This is the story of the Samaritan woman in John 4. This woman was so thirsty that she had been married five different times and was now living with a man that wasn't even her husband. Her thirst? Companionship, affection and more. So Jesus decided, alright, it's time to help this woman quench her thirst and set a trap for her at a well. Imagine that? A thirst trap at a well. Isn't that kind of cliché? So when Jesus asked her for a drink (John 4:7) she thought He was asking for water like any normal guy would do. Unknown to her, He was asking her the question she was to ask Him. It took her quite a while to realise that Jesus was the one offering her a drink to quench her thirst. This was a really thirsty woman.

As human beings, there is nothing wrong in been thirsty. It is part of our genetic make-up. The issue on ground is where we go to quench that thirst. When you're thirsty, what well do you go to draw water from? 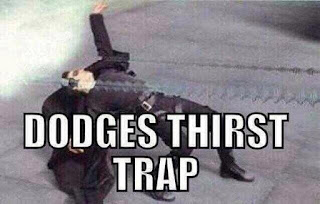 Don't do like the Sprite slogan and blindly obey your thirst because it may lead you to sin. What are we supposed to do when faced with the thirst trap? Let's see what Jesus said to the woman of Samaria:

"Jesus answered and said to her, 'If you knew the gift of God, and who it is who says to you, 'Give Me a drink,' you would have asked Him, and He would have given you living water." John‬ 4:10‬ NKJV‬

The expectation from God is that when we are faced with a thirst, we turn to Him who is described as the living water. God is the only one who can quench the thirst we feel. Everything else will give us a temporary satisfaction and nothing more (John 4:13) but when we draw from the well that contains living water, our thirst is forever quenched. This is the only way to overcome the thirst trap and not fall into sin or end up chasing worldly pleasures or desires. ‬‬

The charge therefore going into this new week is to search for areas in our lives in which we are thirsty, ask God for forgiveness for drawing from the wrong wells and commit to God to forever draw from Him, the well of living waters. When he says the water will become a fountain, it simply means that not only will our thirst be quenched but we would become fruitful and flourish.

PS: I had the intention of writing on government for this week but it would seem like the time is not right as I got led to write on this instead. Our post next week will be titled: The valiant hand of the Lord (Ps 118:14-15 & 77:15).