Can God Boast About You?

Then the LORD asked Satan, "Have you noticed my servant Job? He is the finest man in all the earth. He is blameless--a man of complete integrity. He fears God and stays away from evil. And he has maintained his integrity, even though you urged me to harm him without cause." ( Job 2:3).
Again, the Lord said to Satan:
"Have you considered My servant Job? For there is no one like him on the earth, a blameless and upright man, fearing God and turning away from evil." (Job 1:8).
Can God Boast About You?
How blameless are you before God? Do you stay away from evil? Do you honour God? Or are you of the school of thought that it's not possible to be perfect and blameless?
Matthew 5:48 says be ye perfect, even as your Father which is in heaven is perfect. We are to become perfect and walk towards perfection.
How to walk towards perfection
1) Cleanse yourselves from everything that defiles your body and spirit, perfecting holiness in the fear of God (2 Corinthians 7:1). It means to stay away from the things that would tarnish your walk with God whether it's what you see, read, hear, where you go, etc.
2) Study the Bible everyday and carefully do what is written in it (Joshua 1:8).
3) Ask the Holy Spirit to help you (John 14:26).
4) Be disciplined.
5) Love the Lord and do things that show that you love Him.
The bible says that For God so loved the world that He gave His only begotten son that whosever believes in Him shall not perish but have everlasting life ( John 3:16). If you were to personalise John 3:16 to your life, what would you say? For (insert your name) loves the Lord that....
Prayer
The strength and boldness to walk in perfection, Lord grant unto me in Jesus' name. Help me to live in perfection.
Have a great week ahead!
Posted by Mysses Lafunky at 07:05 No comments:

What is Discipline?
It’s a conscious control over one’s lifestyle; mental self-control used in directing or changing behaviour (I gleaned that from the Microsoft® Encarta® dictionary). The bible gives many instructions on how to live our lives as children of God such as: “this book of the law shall not depart out of thy mouth; but thou shalt meditate therein day and night . . .” and “pray without ceasing” among many others. But how many of us are committed to actually doing these?

The issue is not with the clarity of the instructions or the resources to execute them because more often than not, we actually do execute them. I believe the culprit here is discipline. Where is the discipline to continue executing these instructions?

Just like developing any skill that requires learning and practice over a period of time such as learning to become a computer programmer or a musician etc. developing into the fully grown adult believer in Christ requires us to learn and continuously practice the word of God. Not just when we feel sad or happy or when we are in a tight corner and things are not going our way but all the time. Consistently! 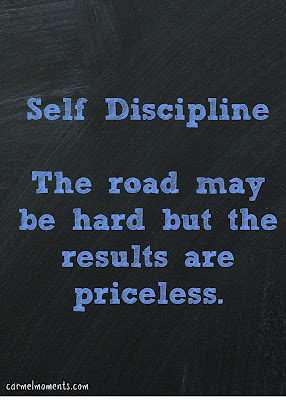 Like athletes who control every bit of their lives to ensure that they are fit and fully prepared for a race or match, we believers have been called to a life of discipline, a conscious control of our lifestyle to ensure that we are not disqualified by God on any grounds. This is not to say that we are saved by being disciplined. No, we are saved by God’s grace and mercy but we remain saved by being disciplined in our commitment to God. Paul said: “I discipline my body like an athlete, training it to do what it should. Otherwise, I fear that after preaching to others I myself might be disqualified” (1Cor 9:27).

The question for you today is: “Are you disciplined in obeying the word?” Have you been consistently studying the word, praying, evangelising, giving to the needy, reaching out to those in need of some form of support etc.?

On a scale of 1 to 10, 1 being not disciplined at all and 10 being fully disciplined. What would you scale yourself? What would increase your scaling and what should you avoid?


I leave this with you: “Be alert, be on watch! Your enemy, the Devil, roams around like a roaring lion, looking for someone to devour.” (1Pet 4:8)

Is God fair? The Fairness of God's Judgement

Therefore you, O son of man, say to the children of your people: The righteousness of the righteous man shall not deliver him in the day of his transgression; as for the wickedness of the wicked, he shall not fall because of it in the day that he turns from his wickedness; nor shall the righteous be able to live because of his righteousness in the day that he sins.
When I say to the righteous that he shall surely live, but he trusts in his own righteousness and commits iniquity, none of his righteous works shall be remembered; but because of the iniquity that he has committed, he shall die.
Again, when I say to the wicked, ‘You shall surely die,’ if he turns from his sin and does what is lawful and right, if the wicked restores the pledge, gives back what he has stolen, and walks in the statutes of life without committing iniquity, he shall surely live; he shall not die. None of his sins which he has committed shall be remembered against him; he has done what is lawful and right; he shall surely live.
Yet the children of your people say, ‘The way of the Lord is not fair.’ But it is their way which is not fair!
When the righteous turns from his righteousness and commits iniquity, he shall die because of it. But when the wicked turns from his wickedness and does what is lawful and right, he shall live because of it.
Yet you say, ‘The way of the Lord is not fair.’ O house of Israel, I will judge every one of you according to his own ways.
Reference: Ezekiel 33:12-20 NKJV
Enjoy your weekend.
Posted by Mysses Lafunky at 09:08 No comments: