Who was Jael? Lessons from the life of Jael

How is your week going? I would like to share some powerful lessons from the life of Jael in the bible. Jael's story can be found in the book of Judges 4.

Jael was married to Heber, the Kenite. She was used by God to kill the commander of Jabin's army (Sisera). She killed a commander. Wow! This was a woman without a title, she was not famous neither was she known by everyone. However, she fulfilled God's purpose for her life. 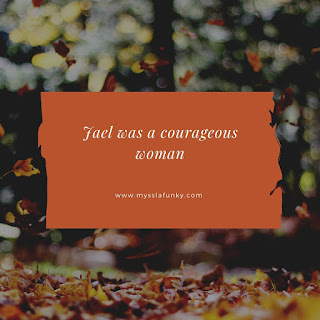 Let me explain a bit more about what was happening at the time.

Children of Israel did things that the Lord saw as evil

Deborah, the wife of Lapidoth, a  prophetess and a judge in Israel who God gave leadership abilities, was judging Israel at that time. Deborah spoke to Barak (the commander of the Israelite army) and told him that God wanted him to deploy troops to fight Sisera (the commander of the Canaanite army) and victory will be granted to the children of Israel. Was Barak keen to deploy troops to fight Sisera? No, he was hesitant to go to battle without Deborah, which showed a lack of trust in what the Lord had said or perhaps he was very anxious given that the Canaanites were powerful and cruel? Barak said something to Deborah.

Barak told Deborah that: "If you will go with me, then I will go; but if you will not go with me, I will not go! (Judges 4:8)" Deborah declared a prophetic word, she said to Barak that she will go with him but there will be no glory for Barak in the journey that he was taking, for the Lord will grant victory over Sisera into the hand of a woman. It is to be noted that the name of the woman was not mentioned when the declaration was made (Judges 4:9).

Barak gathered all his chariots, and Deborah went up with him to fight Sisera and his chariots. When Sisera noticed that they were losing, he fled for his life. He fled to Jael's tent.

Sisera ran to the tent of Jael, the Kenite, for there was peace between the Kenite and the Canaanite. Sisera must have concluded that he was going to be safe at Jael's tent. However, he got it wrong. God had a plan to kill him since he was an enemy of God's children.

Sisera told Jael that if any man comes and inquires about him, she should say he was not there. Jael concealed him with a blanket and offered him a jug of milk, a sign of hospitality. Sisera was tired and fell asleep. Jael made use of this opportunity, she took a tent peg and took a hammer in her hand, and went softly to kill him, so Sisera died.

Barak turned up at Jael's tent, asking for Sisera. Jael said to him: "Come, I will show you the man whom you're after, there lay Sisera, dead with the peg in his temple." (Judges 4:22).

Lessons from the life of Jael

1) Jael fulfilled purpose even though she did not have a title neither was she holding an office (a position of authority).

2) Jael acted on the opportunity that the Lord had given her even when it did not make sense. She did not overanalyse it, she did not overthink it. She acted even when she may have been afraid.

3) Jael used what she had in her hands to fulfil God's plan for her life.

4) Jael trusted the Lord and the prophetic declaration by Deborah came to pass. The Lord used her to grant victory over Sisera.

5) Jael did not have followers neither was she popular before she fulfilled God's purpose.

Can you think of any other lessons from the life of Jael?